Schwartz Lloyd
"There is no one quite like Lloyd Schwartz, whose unique combination of comedy and pathos is rare in contemporary American poetry. Over the years and books, Schwartz has developed a pitch-perfect ear for dialogue, producing poems that are hilarious in their depiction of unsettling social situations, while still managing to find the kernel of poignancy buried in everyday encounters. He is a master of the speech-driven style of verse, which is based on overheard, interrupted, or invented conversations that are by turns humorous and deeply unsettling, intimate yet decorous. In the new poems section, Schwartz brings his broad experience across the arts (including his many years as a music critic and commentator) to bear, with poems that recall the feeling of both performing and apprehending a piece of music, say, or a painting, a film, or a poem; he explores the figures depicted within these artworks, their fears and desires, revealing whole unexplored, interior worlds, a universe in a pack of tarot cards. This collection, which gathers the very best of Schwartz's work over his long, distinguished career, amply displays the tenderness and delicacy of feeling that we've come to rely on in his poetry. "Who's on First?" is a fitting capstone to a long life lived in the arts"--
$20.00 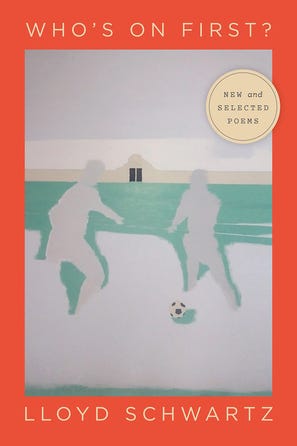 Skip to the beginning of the images gallery
Description
Book Details
New and selected poems by renowned poet Lloyd Schwartz. For more than four decades, readers and critics have found Lloyd Schwartz's poems unlike anyone else's--a rare combination of the heartbreaking and the hilarious. With his ear for the poetry of the vernacular, Schwartz offers us a memorable cast of characters--both real and imagined, foolish and oracular. Readers experience his mother's piercing flashes of memory, the perverse comic wisdom of Gracie Allen, the uninhibited yet loving exhibitionists of antique pornography, and eager travelers crossing America in a club-car or waiting in a Brazilian airport. Schwartz listens to these people without judging--understanding that they are all trying to live their lives, whenever possible, with tenderness, humor, and grace. Who's on First? brings together a selection of poems from all of Schwartz's previous collections along with eagerly awaited new poems, highlighting his formal inventiveness in tangling and untangling the yarn of comedy and pathos. Underlying all of these poems is the question of what it takes and what it costs to make art.