The Conspiracy Trial of the Chicago Seven 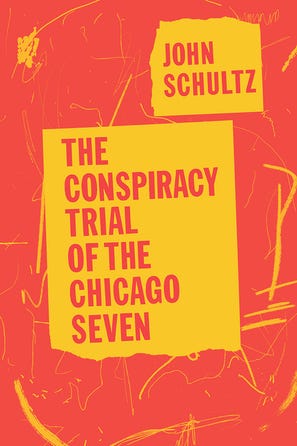 In 1969, the Chicago Seven were charged with intent to "incite, organize, promote, and encourage" antiwar riots during the chaotic 1968 Democratic National Convention in Chicago. The defendants included major figures of the antiwar and racial justice movements: Abbie Hoffman and Jerry Rubin, the madcap founders of the Yippies; Tom Hayden and Rennie Davis, founders of Students for a Democratic Society and longtime antiwar organizers; David Dellinger, a pacifist and chair of the National Mobilization Committee to End the War in Vietnam; and Bobby Seale, co-founder of the Black Panther Party, who would be bound and gagged in the courtroom before his case was severed from the rest.

The Conspiracy Trial of the Chicago Seven is an electrifying account of the months-long trial that commanded the attention of a divided nation. John Schultz, on assignment for The Evergreen Review, witnessed the whole trial of the Chicago Seven, from the jury selection to the aftermath of the verdict. In his vivid account, Schultz exposes the raw emotions, surreal testimony, and judicial prejudice that came to define one of the most significant legal events in American history. In October 2020, Aaron Sorkin's film, The Trial of the Chicago Seven, will bring this iconic trial to the screen.