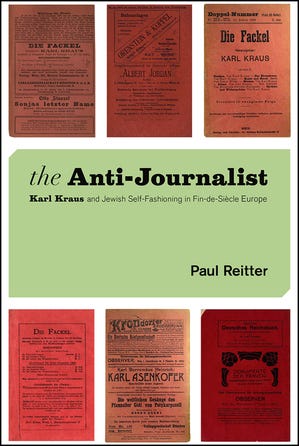 Skip to the beginning of the images gallery
Description
Book Details
In turn-of-the-century Vienna, Karl Kraus created a bold new style of media criticism, penning incisive satires that elicited both admiration and outrage. Kraus's spectacularly hostile critiques often focused on his fellow Jewish journalists, which brought him a reputation as the quintessential self-hating Jew. The Anti-Journalist overturns this view with unprecedented force and sophistication, showing how Kraus's criticisms form the center of a radical model of German-Jewish self-fashioning, and how that model developed in concert with Kraus's modernist journalistic style.
Paul Reitter's study of Kraus's writings situates them in the context of fin-de-siècle German-Jewish intellectual society. He argues that rather than stemming from anti-Semitism, Kraus's attacks constituted an innovative critique of mainstream German-Jewish strategies for assimilation. Marshalling three of the most daring German-Jewish authors--Kafka, Scholem, and Benjamin--Reitter explains their admiration for Kraus's project and demonstrates his influence on their own notions of cultural authenticity. The Anti-Journalist is at once a new interpretation of a fascinating modernist oeuvre and a heady exploration of an important stage in the history of German-Jewish thinking about identity.