Sri Lanka--Ethnic Fratricide and the Dismantling of Democracy 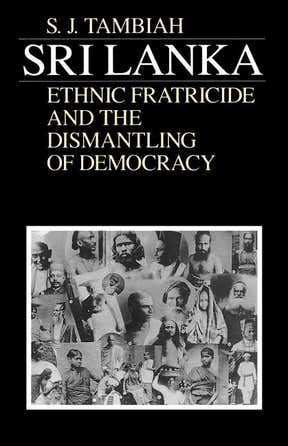 Skip to the beginning of the images gallery
Description
Book Details
Focusing on the historical events of post-independence Sri Lanka, S. J. Tambiah analyzes the causes of the violent conflict between the majority Sinhalese Buddhists and the minority Tamils. He demonstrates that the crisis is primarily a result of recent societal stresses-educational expansions, linguistic policy, unemployment, uneven income distribution, population movements, contemporary uses of the past as religious and national ideology, and trends toward authoritarianism-rather than age-old racial and religious differences. "In this concise, informative, lucidly written book, scrupulously documented and well indexed, [Tambiah] trains his dispassionate anthropologist's eye on the tangled roots of an urgent, present-day problem in the passionate hope that enlightenment, understanding, and a generous spirit of compromise may yet be able to prevail."-Merle Rubin, Christian Science Monitor

"An incredibly rich and balanced analysis of the crisis. It is exemplary in highlighting the general complexities of ethnic crises in long-lived societies carrying a burden of historical memories."-Amita Shastri, Journal of Asian Studies "Tambiah makes an eloquent case for pluralist democracy in a country abundantly endowed with excuses to abandon such an approach to politics."-Donald L. Horowitz, New Republic
"An excellent and thought-provoking book, for anyone who cares about Sri Lanka."-Paul Sieghart, Los Angeles Times Book Review