The store will not work correctly in the case when cookies are disabled.
Bruce Smith

$22.50
Backorders usually ship in 1-3 weeks
Skip to the end of the images gallery 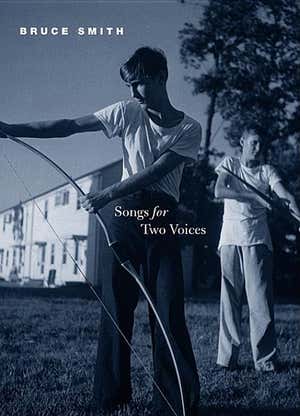 Skip to the beginning of the images gallery
description
Part ancient Greek chorus, part Southern Baptist revival, Songs for Two Voices is an explosive showcase for Bruce Smith's jazz-like variations on sonnets and couplets, offering twenty-five duets: poems of call and response, song and countersong. In poems that groove and break, shimmy and dance, Smith filters his Miles Davis-like riffs through a post-World War II American sensibility to deliver verse without platitudes. As Smith's speakers wander through the detritus of American materialism-encountering jazz, football, drag, class war, Reaganomics, and Vietnam-the poems dramatize the contradictions and peculiarities of growing up male in Cold War America, both sensing promise and suffering disillusion. Each poem here speaks in two voices: one that attacks and one that cowers, one voice that leads while the other follows. But Smith's subjects are unencumbered by form, and their voices blossom in duet: the idealized lover is also a betrayer, the man is also a girl. These binaries of statement and contradiction give birth to a third voice in the unrealized possibilities of the two. A mesmerizing follow-up to 2000's The Other Lover, Smith's Songs for Two Voices is carnal yet fiercely intellectual, laid out with the self-confidence of a poet who can invoke Mozart and Coltrane, Anna Akhmatova and John Wayne, Teddy Roosevelt and Augustine in the same incendiary breath.
DETAILS
PRODUCT REVIEW