The store will not work correctly in the case when cookies are disabled.
Marie Ferrarella, Barbara Wallace, Judy Christenberry

Digital books are available immediately after purchase! Please download our Booksio Reader App and log in to begin reading! Booksio digital books are not compatible with Kindle, Apple Books, or other proprietary devices.

Free
Skip to the end of the images gallery 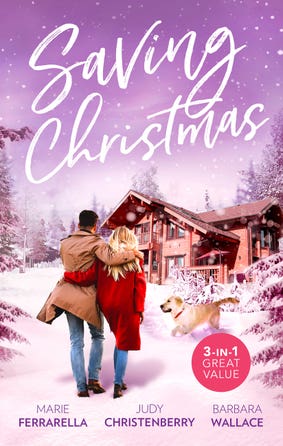 They say you can’t go home again, but Keith O’Connell wasn’t worried about staying. He was just back in town to sell his late mother’s house and try to avoid old emotions. Of course, hiring estate sale specialist Kenzie Bradshaw meant the possibility of creating new memories before he left. Especially once the Matchmaking Mamas hatched a plan.

Kenzie Bradshaw was used to the turmoil involved in estate sales, though she’d never had a client like Keith. He wanted everything gone. She knew, however, there were some things — some memories — he shouldn’t lose. Convincing him to spend one last Christmas in his family’s home could melt his hardened heart. But would it bring back the man she used to know and love?

Sally Rogers’s family store is the heart and soul of the small town of Bailey, and she’s working all hours to keep her business afloat. So when city slicker Hunter Bedford arrives, determined to buy her out, Sally is furious. No way will she sell to a ruthless businessman like Hunter!

Instead, with Christmas approaching, she’ll show him the warmth and spirit of Bailey. But as the snow falls thick and fast, they are trapped together, and Sally begins to wonder if she’s snowbound with Mr Right…

Abandoned by his mother on Christmas Day, James Hammond wishes he could simply erase the date. So when his company buys a new toy store devoted to Christmas, he wants to seal the deal and get home. Until he finds himself injured and under the care of employee Noelle!

Nobody loves Christmas more than young widow Noelle Fryberg! But could she be the one to change his mind and melt the millionaire’s guarded heart?