The store will not work correctly in the case when cookies are disabled.
Halik Kochanski

$45.00
"To resist, therefore. But how, when and where? There were no laws, no guidelines, no precedents to show the way . . ." --Dutch resister Herman FriedhoffIn every country that fell to the Third Reich during the Second World War, from France in the west to parts of the Soviet... Read More 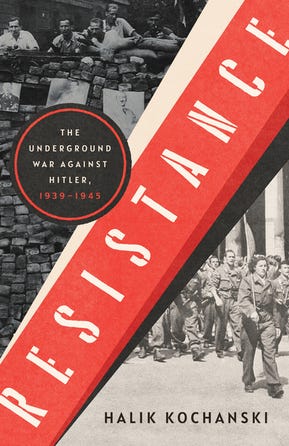 "To resist, therefore. But how, when and where? There were no laws, no guidelines, no precedents to show the way . . ." --Dutch resister Herman Friedhoff

In every country that fell to the Third Reich during the Second World War, from France in the west to parts of the Soviet Union in the east, a resistance movement against Nazi domination emerged. And every country that endured occupation created its own fiercely nationalist account of the role of homegrown resistance in its eventual liberation. Halik Kochanski's panoramic, prodigiously researched work is a monumental achievement: the first book to strip these disparate national histories of myth and nostalgia and to integrate them into a definitive chronicle of the underground war against the Nazis.

Bringing to light many powerful and often little-known stories, Resistance shows how small bands of individuals took actions that could lead not merely to their own deaths, but to the liquidation of their families and their entire communities. As Kochanski demonstrates, most who joined up were not supermen and superwomen, but ordinary people drawn from all walks of life who would not have been expected--least of all by themselves--to become heroes of any kind. Kochanski also covers the sheer variety of resistance activities, from the clandestine press, assistance to Allied servicemen evading capture, and the provision of intelligence to the Allies to the more violent manifestations of resistance through sabotage and armed insurrection. For many people, resistance was not an occupation or an identity, but an activity: a person would deliver a cache of stolen documents to armed partisans and then seamlessly return to their normal life. For Jews under Nazi rule, meanwhile, the stakes at every point were life and death; resistance was less about national restoration than about mere survival.

Why resist at all? Who is the real enemy? What kind of future are we risking our lives for? These and other questions animated those who resisted. With penetrating insight, Kochanski reveals that the single quality that defined resistance across borders was resilience: despite the constant arrests and executions, resistance movements rebuilt themselves time and time again. A landmark history that will endure for decades to come, Resistance forces every reader to ask themselves yet another question, this distinct to our own times: "What would I have done?"