Fugitive Prince: First Book of the Alliance of Light (the Wars of Light and Shadow, Book 4)

Wurts Janny
With the appalling destruction of the Vastmark warhost, recoil and grief reshape the balance of power in the Five Kingdoms. Two half brothers, cursed by a Mistwraith to a lifelong enmity, are set in violent conflict. And there are those between who will stop at nothing to fulfill secret desires and consolidate their own power. With faction set against faction, heart set against heart, and spells of high mastery engaged to cast down the ancient mysteries, the moves made by all will remake the course of the world's destiny.
$8.99 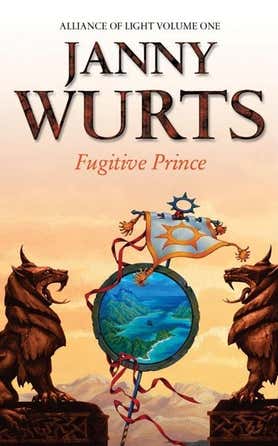 Where there is light, there must always be shadow... The fourth volume in Janny Wurts's spectacular epic fantasy, now re-released with a striking new cover design along with the rest of the series.

The schism began with two half-brothers empowered to subdue a Mistwraith. In revenge it cursed them to a life of perpetual conflict. Each believes absolutely in his cause, and loathes the other for opposing it...

Lysaer, Prince of the Light - a charismatic leader sworn to set humanity free from sorcerous oppression. He claims divine power to safeguard his people from an enemy he is convinced will destroy them.

Arithon, Master of Shadow - a trained mage who wishes for nothing but to defuse war, and search out the vanished old races who hold the key to restore the world's shattered peace.

When Koriani enchantresses join forces with Lysaer, new intrigues upset Arithon's hard-won autonomy. Faction is set against faction, heart against heart, and the scene is set for an explosive recurrence of war. The curse of the Mistwraith echoes eternal...