Taylor Mark C
Awash in a sea of data that seems to have no meaning and bombarded by images and sounds transmitted from around the globe 24/7, people are no longer sure what is real and what is fake. Artists recycle ads in their paintings and businesses use images of artists in their... Read More
$32.00 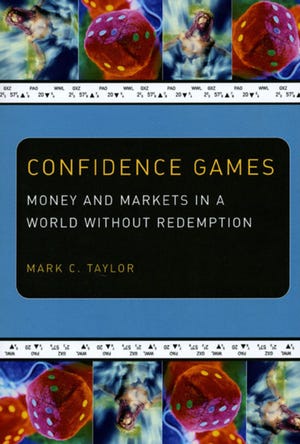 Skip to the beginning of the images gallery
Description
Book Details
Awash in a sea of data that seems to have no meaning and bombarded by images and sounds transmitted from around the globe 24/7, people are no longer sure what is real and what is fake. Artists recycle ads in their paintings and businesses use images of artists in their ads; politicians mount campaigns based on hit films; and bankers make billions trading incomprehensible financial products backed by nothing more than abstract figures and signs. In Confidence Games, Mark C. Taylor considers the implications of these developments for our digital and increasingly virtual economy. According to Taylor, money and markets do not exist in a vacuum but grow in a profoundly cultural medium, reflecting and in turn shaping their world. To understand the recent changes in our economy, it is not enough to analyze the impact of politics and technology--one must consider the influence of art, philosophy, and religion as well. Bringing John Calvin, G. W. F. Hegel, and Adam Smith to Wall Street by way of Las Vegas, Taylor first explores the historical and psychological origins of money, the importance of religious beliefs and practices for the emergence of markets, and the unexpected role of religion and art in the classical understanding of economics. He then moves to an account of economic developments during the past four decades, exploring the dawn of our new information age, the growing virtuality of money and markets, and the complexity of the networks by which monetary value is now negotiated. Returning full circle to a version of the market first proposed by Adam Smith when he used theology and aesthetics to rethink economics, Confidence Games closes with a plea for a conception of life that embraces uncertainty and insecurity as signs of the openness of the future. Like religion and economics, life is a confidence game in which the challenge is not to find redemption but to learn to live without it.

Before the global credit system began its collapse in 2007, Mark Taylor had connected the dots between increasingly complex financial instruments and larger cultural forces. Anyone who wants to understand the disappearing foundation of our financial markets needs to read this book immediately.--Michael Lewitt, editor, The HCM Market Letter

"Beyond simply dealing with 'money and markets, ' Confidence Games is a fascinating and wide-ranging tour of modern and postmodern ideas and conditions from Aristotle to Nietzsche, from Wall Street to Las Vegas."--Craig Bay, Journal of Markets & Morality