The store will not work correctly in the case when cookies are disabled.
Debbie Macomber, JILL SHALVIS, Sheila Roberts

Free
’Tis the season to be jolly with this heartwarming collection of festive romances. The Snow Bride - Debbie MacomberPractical Jenna Campbell has done something impractical: she’s met a sensitive, gallant and romantic man on the internet and now, a month before Christmas, she’s going to Alaska to marry him. On... Read More

Digital books are available immediately after purchase! Please download our Booksio Reader App and log in to begin reading! Booksio digital books are not compatible with Kindle, Apple Books, or other proprietary devices.

Free
Skip to the end of the images gallery 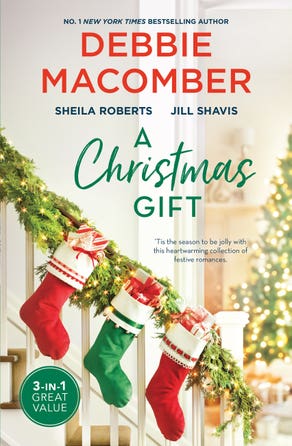 ’Tis the season to be jolly with this heartwarming collection of festive romances.

Practical Jenna Campbell has done something impractical: she’s met a sensitive, gallant and romantic man on the internet and now, a month before Christmas, she’s going to Alaska to marry him. On the flight to Fairbanks, she has the misfortune to sit beside Reid Jamison, who obviously isn’t sensitive, gallant or romantic. However, he’s not impressed with her plan to marry Dalton, a man he detests. So Reid takes it upon himself to change her destination — and her marriage plans.

Which is why Jenna ends up at Reid’s cabin in tiny Snowbound, Alaska. It’s currently a one-woman town (and the other woman’s out of town). That leaves Reid, a bunch of eccentric old men, a few grizzly bears — and Jenna. Kidnapped! And then there’s a blizzard. With the two of them stranded in Snowbound, maybe she’ll be a Christmas bride, after all!

The Road To Christmas - Sheila Roberts

Michelle and Max are not planning on a happy holiday. Their marriage is in shambles, but now their youngest daughter, Julia, wants everyone to come to her new house in Idaho for Christmas, and she’s got the guest room all ready for Mum and Dad.

Their other daughters, Audrey and Shyla, are driving up from California and hoping to meet a sexy rancher for Audrey along the way. What they don’t plan on is getting stranded on a ranch when the car breaks down.

The ones with the shortest drive are Grandma and Grandpa — also known as Hazel and Warren. It’s still a bit of a trek, and Hazel doesn’t like the idea of driving all that way in snow, but Warren knows they’ll have no problem. They have a reliable car — and snow tires and chains if they need them. They’ll be fine.

Surprises lie in store for all three sets of intrepid travelers as they set out on three very different adventures, all leading to one memorable family Christmas.

Sheriff Riley McMann couldn’t believe his ears when Holly Stone announced that she’d be taking over the only café in Little Paradise. She looked as if she hadn’t worked a day in her life, and besides, he had to eat there! But he was soon working up quite an appetite for ‘Calamity Holly’ when he discovered there was more to her than designer clothes and an attitude. Maybe his Christmas wishes were going to come true after all…